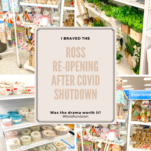 I have not been pining for any brick and mortar department stores to re-open during this unfortunate COVID-19 epidemic. To be honest, I do ninety percent of my shopping online, via Amazon and few other favs of mine. Walmart, Target, and Sam’s have remained open and we have made responsible use of those when we needed to. I must say, however, that recently I started itching for my bargain household stores, namely, Ross. Of course I also adore TJ MAXX, HomeGoods, and Marshalls, but I have not wanted to venture to any of them.  Sighs. I hate to even admit this, as going is not so much a necessity as it is a desire. So, when I started hearing murmuring about them opening, my interest was piqued. I hurriedly went to Google. I searched their web address and saw the announcement. Gasp. It was official. They asked for my zip code and I nervously entered in “28460.”  That is when I discovered they would be opening this morning at ten. I immediately started to construct an intricate plan to be there an hour before it opened. I had heard about long lines and big crowds and I did not want to encounter that  but I knew it was a definite possibility.

So, this morning came and I was off! I am not a morning person so I did not end up getting there an hour early-I got there about 45 minutes early, and there was the glorious line already waiting for me. It was not long though! I could see what appeared to be about 45 people outside with umbrellas. Oh yeah, I forgot to mention it was pouring rain this morning. How lovely. I have never liked to fuss with an umbrella though-too bulky. I was in a rain jacket and my mask and cap.

*This web page may contain affiliate links for your convenience; meaning RCI+Topsail will earn a small commission if you click through and make a qualifying purchase. This is at no extra cost to you, but does help to support this blog.

If you are looking for an umbrella, this is a favorite for RCI+Topsail!

I nervously got in line and quickly inquired about the first thing that came to my mind: how many people were they initially letting in. A friendly employee told me 121, so I knew that everyone, including me would be let in during the first wave, in staggered groups of 5. It wasn’t long, however, before an argument erupted about someone being cut in line. Cue the dramatic music. This was another apprehension of mine-drama ensuing over bargains. Sighs. Some people around me assured the person that their space in line would be secured and that it was a void issue anyways, because we were all guaranteed entry. Okay, enough of that. Ten o’clock came and they began a slow and steady opening. It was probably less than ten minutes before I was granted entry. The day before I had read about items being reduced as much as seventy-five percent!

So, did the reality live up to the hype?  Here are all the deals I found today:

All Easter decor is $.99!!!!! Is Easter over? Yes. Was the price so low that I still stocked up for next year? Of course! The decor bunnies, dish-ware, and accessories were all adorable.

I found patio furniture! Two, attractive chairs to go on my screened in porch. Sometimes finding matching items can be a challenge at stores like these, so this is a real win. They were only $19.99 each!

FYI: I only shop the home section at Ross, but my husband perused the clothing section and found men’s polos for under ten bucks, along with active shorts. I am not a fan of rummaging through clothing racks, but a close friend who went to the Wilmington location also reported that clothes and shoes were deeply discounted and she was able to stock up. Her items ranged from three to ten dollars!

Are you a huge fan of decor faux plants and silk florals? They had a plethora of different colors, styles, and sizes! They brighten up a space so well and they also do not die, if you have a struggling green thumb like I am!

During my visit, the store was not congested, as they are doing half capacity. The lines moved swiftly and I am glad that they were able to survive after being closed so long. That has not been the case for so many other beloved stores. I read this morning that Pier 1 Imports are closing all stores and going out of business. Other stores were able to keep online shopping as an option even though their physical stores have closed.

So, was venturing out in the rain, waiting in line, and wearing an uncomfortable mask worth it?

I would have to say so. The items I got for my house are normally so much higher at other places. Would I suggest that if you are in Jacksonville and have the spare time to stop into Ross, that you should? Definitely! Come on, it’s one of those stores where you always find SOMETHING!

Last, but certainly not least, as they are my favorite-let’s not forget SMALL BUSINESSES. They need us the most. This is one of my sole reasons behind zeroing in on local eateries.