We love the education that Ecological Marine Adventures (aka “EMA Topsail”) brings to our community! Even though they are temporarily in Nicaragua on some cool aqua adventures, they are still teaching the Topsail community about the marine ecosystem! I asked Amber Maready, owner of EMA Topsail, to give us some insight into dolphins with the upcoming Dolphin Dip (New Years Day) which will be raising funds for Share The Table this year. If you haven’t heard the EMA Topsail story, click here to learn more about this amazing education center and its owners, Amber & Taylor Maready). 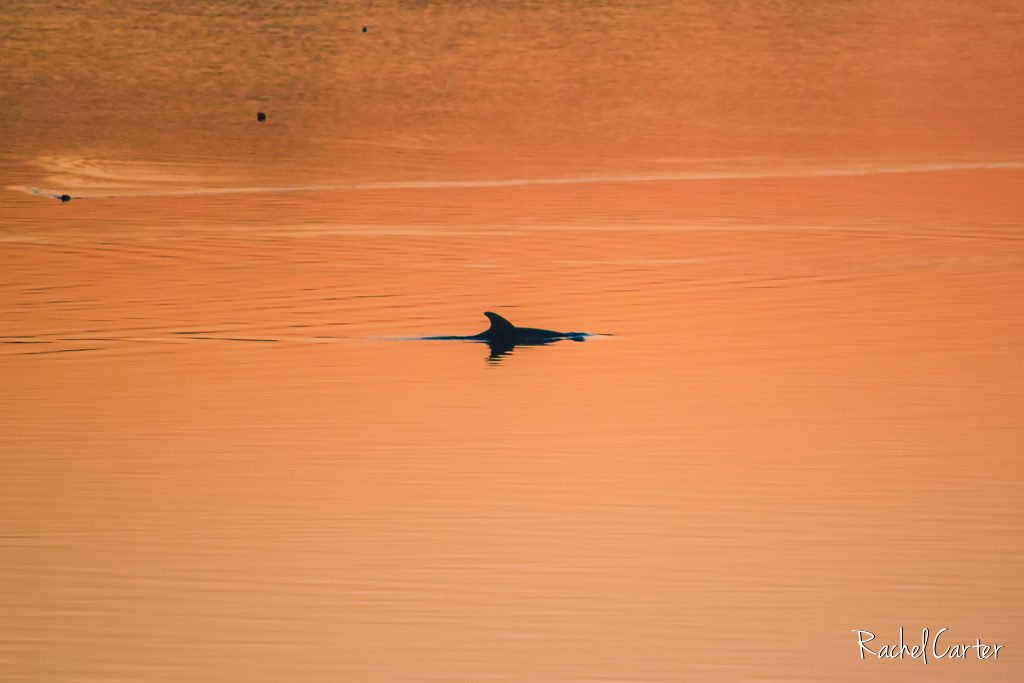 Nothing screams “Happy New Year” in our beachtown like the words “Dolphin Dip”- and we aren’t talking about a party food.

If you haven’t done it, do it…

Mr. Taylor did it a few years ago and made the front page of the paper…

Google it, if you dare…

If you have no idea what I am talking about when I say Dolphin Dip, the wonderful Rachel Carter is covering this (awesome) annual event.

With the new year approaching, I was honored to be asked to poke my (bottle)nose in the dolphin talk!

We all love dolphins, I mean, have you ever met someone who does not jump for joy when they spot dolphins? Just a distant sight of a dorsal fin brings peace and relaxation to any day. But these beautiful mammals are more than just their aura, so today I want to share 9 reasons why you should strive to be a dolphin all-year long. 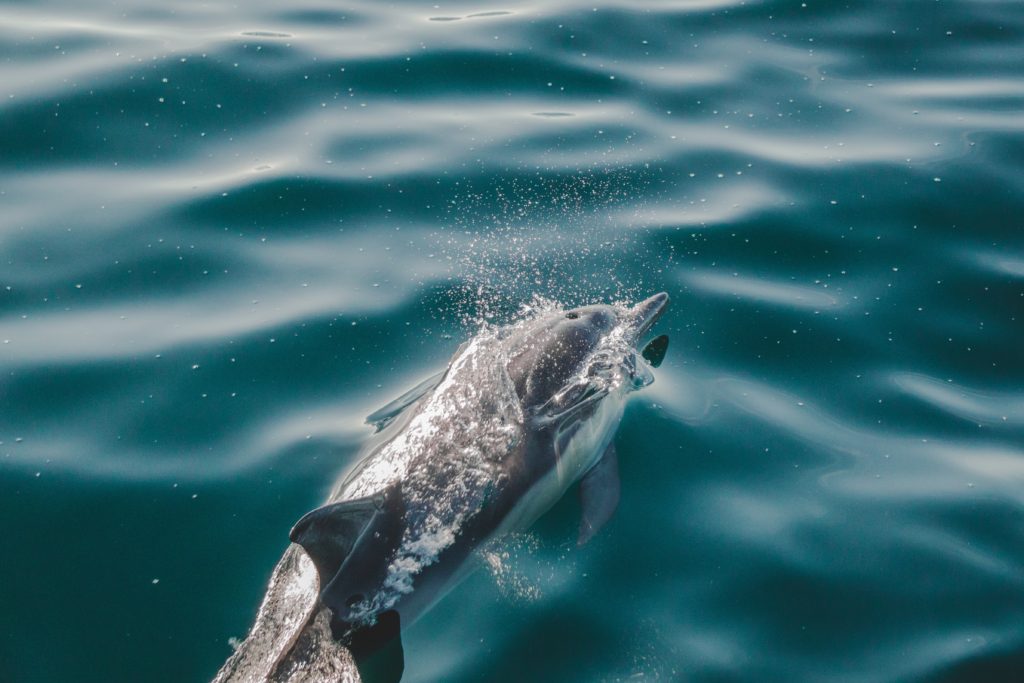 Growing up, I would always hear “wooo-saaah” when someone in my family needed to relax or restart.

(Think of a 6 year old little boy touching his thumbs and pointer fingers together in a ‘OK’ type hand signal while attempting to clear his mind- that was “wooo-saah”.)

Now,  I’ve never heard a dolphin say “wooo-saaah”, but I feel it when they are around. While scientists don’t have an exact reasoning for their relaxing, yet uplighting and enlightening impression on humans, many believe their graceful swimming and jumping, peaceful interactions with humans, social characteristics, perpetual smiles, strong bonds and their playful nature lead to our calming, yet joyous, reactions.

They really do have a relaxing aura.

Dolphins learn and communicate using a vocal language, they have passed the mirror-recognition test (MRT) and their brains are second to ours in size. In fact, they are so intelligent that as humans spend their entire careers (decades) studying them, they realize that how much they are learning is a small dent on how much is yet to be discovered.

Be a bottlenose or be a southern white whale dolphin (which have no dorsal fins). Whichever you are, swim gracefully and remember that you have a people ‘woo-saah-ing’ over your awesomeness. 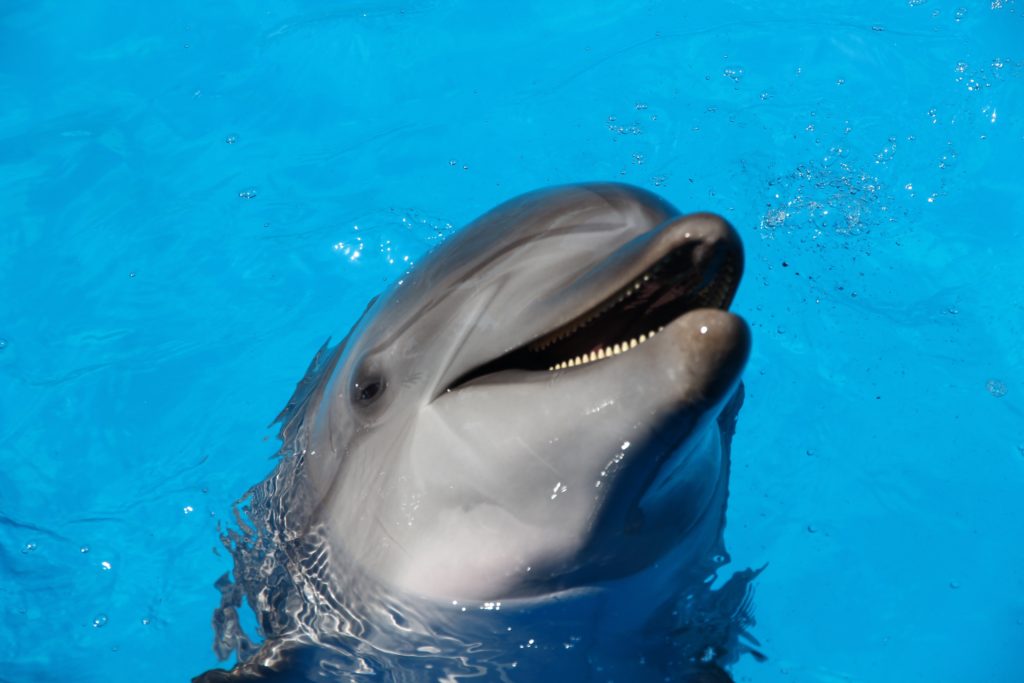 They are known to be super playful, kind of like Mr. Taylor..and Indy….and Vai.

Dolphins are known to play their version of catch with items, like seaweed, by catching them on their dorsal and pectoral fins. Too many pictures have been captured with trash on their fins instead of the seaweed that they search for. So, be like our dolphins this year and play. Play hard. Play in and with the beauty around you.

5. Be kind and give a helping hand.

They are very social and are known to bond with other members of their pod. Dare I even say that they are compassionate? Because they really are.

Many studies have even gone out on a limb to say that they have culture, which, up until recently, was thought to only apply to the human species. Dolphins have been seen helping critters that are not in their pod, or even in the same family, like humans. So, be cultural. Be compassionate. Help someone, even if they are not your species. 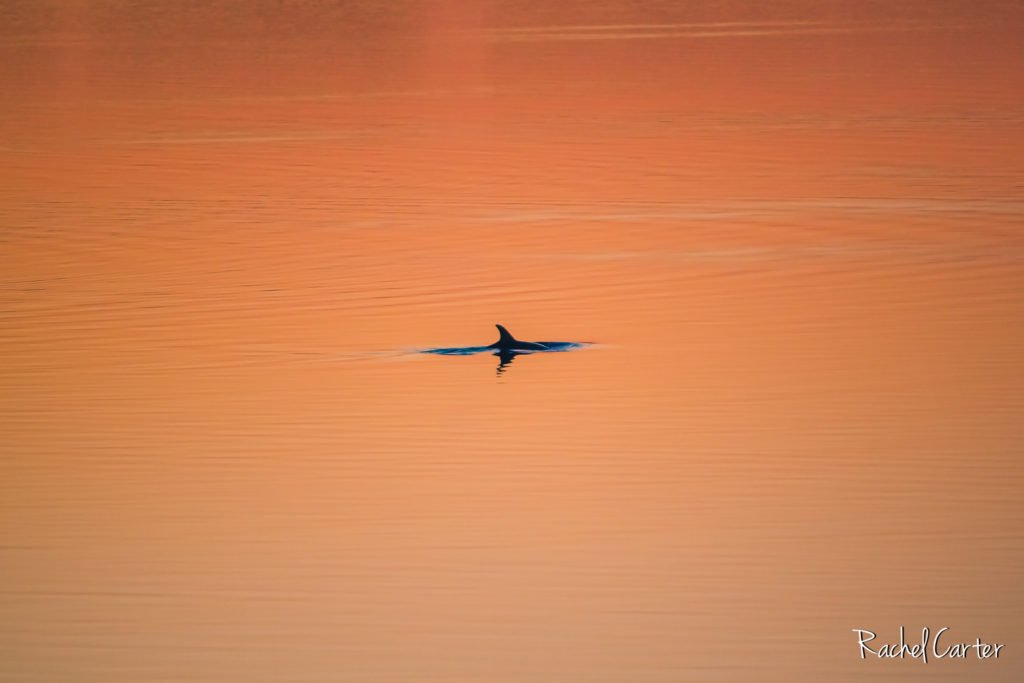 Yep, you heard that right. As mentioned above, dolphins vocally communicate. AH-MAZ-ING.

They have a language of clicks, whistles, grunts, moans and squeals to communicate with each other, and maybe soon with scientists. Two super amazing breakthroughs, in the terms of science for dolphins (and humans, if you ask me) is that they (first) were able to be taught how to read, in a sense. They have been taught certain commands with symbols on large boards, along with hand signals. After a few weeks, the dolphins could complete the given command or task using only the two-dimensional board.

Second, there is a prototype out for CHAT (Cetacean Hearing and Telemetry), which hopes to improve information-processing for animal communication. (Google it- Dr. Herzing is phenomenal.) Imagine two-way communicate with a dolphin.

What would you tell a pod of dolphins first?

7. Their eyesight is fintastic.

Just a friendly reminder not to skip your appointment with your family Ophthalmologist.

But, seriously, the eyesight of a dolphin is great- with the exception of some species of river dolphins. River dolphins depend on their well-developed hearing to navigate the muddy waters that most species live in.

Over time, many species of river dolphin, like the Indus river dolphin, have smaller eyes that lack a lens, which essentially leaves them blind. So, yeah, don’t skip your annual check-up. Let’s make sure our lens are doing their jobs. 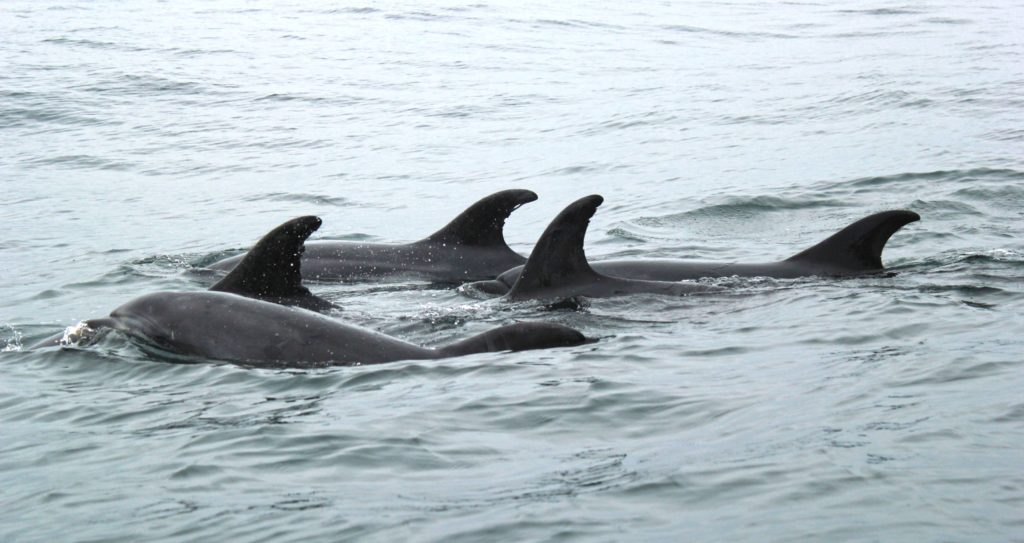 We always hear people say “Work hard, play hard” and I think that applies to our dolphins as well. They work hard to hunt and they play hard within their pods. A large dolphin eats an average of 33 pounds of fish per day! Scientific research shows that much of dolphin play within the pod is to help teach and prepare the dolphins for hunting. They play hard so that they can hunt hard… and eat well.

In the case that you are still wondering if dolphins are really as brilliant, amazing and interesting as I have claimed above, let me leave you with reason number nine (9).

Dolphins don’t have to stop to ask for directions, not even the male dolphins, because they use their very own version of GPS. They use echolocation, or sonar as many are familiar with, which is helpful to better navigate and hunt for food. Although dolphins do have exceptionally great eyesight, with the exception of some river dolphins, their echolocation is especially useful in unclear water or when their prey is hiding, like in coral or sand.

So, how does echolocation work? It is pretty awesome. They produce clicks and, use a part of their body called the melon, to focus the waves on their surroundings. Using special cavities in their jaw, they can detect and interpret the echoes that bounce back to them. Essentially, this helps them to build a picture of what is around them, even if they cannot see it. Luckily for them, their version of GPS is built-in. Lucky for us, our version of GPS is built-in.. to most cell-phones and handheld devices. Just save yourself the time, use the GPS.

What we can do is, one, do the dolphin dip. Set your alarm. Get there early to enjoy the sunrise over the beach! Pull out your bathing suit. Bundle up on the beach in your favorite hoodie and sweats. And then do it. Yep, it is a little chilly. Yep, you will let out some squeals, moans, groans and clicking of your own, but it. is. worth. it. 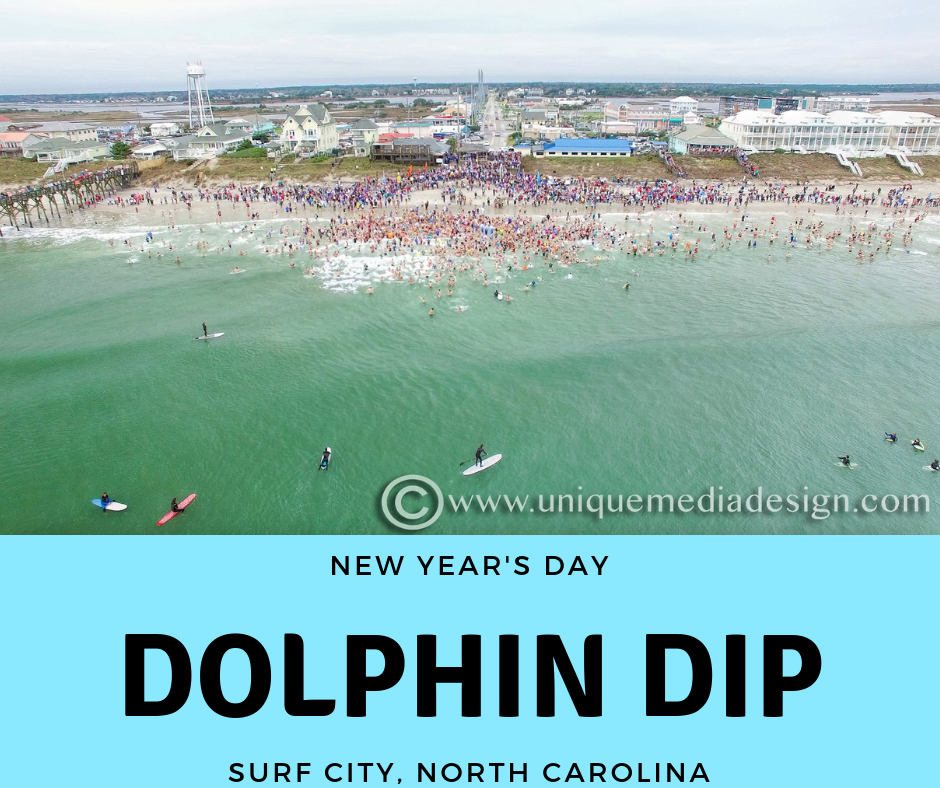 Then when you get out, in shock that the water is that cold when it is almost too warm to be enjoyable in September, give someone new a high-five, find your hoodie and sweats and realize that you are a dolphin. (And by dolphin, I mean awesome.)

Second, while the new year is about making resolutions and betting ourselves, maybe we can make a few ocean-minded changes, too.

Maybe together, we can pick up a few more pieces of trash, use a few less straws, choose the big bag of chips instead of the 30 pack of minis, trade out our single-use zip-lock bags for reusable ones, put back the pack of single-use water bottles and grab a new reusable one, ask for paper if we forget our reusable shopping bags, when time comes for a new toothbrush- maybe choose a bamboo brush instead of plastic and then, even though we can’t be actually be a dolphin when we grow up, maybe we can see more of them during our lifetime.

Fun fact: Oysters are excellent at doing their part to clean the ocean, making them a friend to dolphins. You can learn more about oysters and how they help the ocean, here:

Stump Sound Oysters
The 7 most interesting facts about oysters