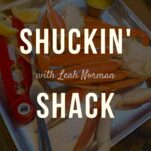 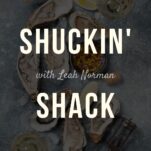 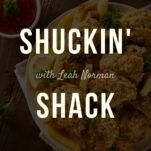 Ah, the days when going out to eat was…normal. What do you do when you have an anniversary during a pandemic? Nothing. That is, until the grandparents are here to babysit. Then, all of a sudden you have a window of hope. A glimpse of being alone, kid-free.

As of last week, restaurants here began to open with capacity restrictions. When I began to call around Friday to see where we could score some seafood, Shuckin’ Shack caught my attention. I called and a very friendly girl named Jordan answered the phone and told me that they were open, half-capacity, with indoor and outdoor seating. I wanted to stay close since there was in impending storm, so we decided to give it a go.

Again, we are still in the beginning phases of “re-opening,” so I figured there would be a crowd out. I was right. Surf City was bustling and alive. You could FEEL the happiness, the excitement. It felt…normal. Social distancing was still maintained but people were happy to see…people. Smiling faces were the “look” of the night. We were told it would be an hour wait. So, what do you do when you have a wait and you’re at an oyster bar? You partake of the drinks. I tried two of their cocktails: house margarita and pearls punch. My fav was the house margarita. So refreshing and tasty.

Onto our first course. We decide to try their menu in phases. First up, were the parmesan garlic, chargrilled oysters, topped with bacon. Yes, bacon. Of course they offer raw and steamed, but I always opt for the grilled. They were great.

We requested three pounds of crab legs and they happily obliged. Everyone, from the greeters at the door, to the bar staff were so friendly and helpful, which was such a nice surprise because I expected be met with disorganization and rushed customer service. We asked if they had king crab legs and they did inform us that they only had Alaskan snow crab, which were delicious. They came out hot with butter and lemon.

I love fried oysters. I know oysters are a preference thing and some people don’t like the texture, but I for one love them. Their fried ones didn’t disappoint. They were huge, juicy, and crispy. I got the combo with the fried shrimp, which were perfectly salted and crisp.

I judge seafood joints by their tartar sauce. If it’s not good and homemade, I won’t be back. There’s was delicious. Creamy. The perfect accompaniment to the fried fare.

So you’ve inhaled half the menu. What do you do now? Order one more thing! I had been eyeing the steamed shrimp and they’re a fav of my husbands so we decided to do a half dozen of them. Old bay seasoned. They also offer lemon pepper. Well, here is where they became my favorite menu item. Out comes the most flavorful peel-and-eat-shrimp I’ve had in a very long time. The flavor is simply undeniable. They’re very large wild American shrimp so peeling them isn’t a hassle and they burst with a very FRESH taste that we couldn’t get enough of. Shuckin’ Shack has mastered steamed shrimp and I want more. Now. When I return , I will be ordering two pounds (or more) of them, and I highly suggest you do as well.

Our server was Hannah and she’s so personable!

Oysters are shucking fantastic. hailing from our very own Stump Sound, the lagoon like water between Sneads Ferry and North Topsail Beach.