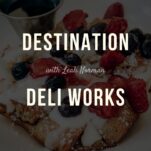 It didn’t take long for me to start hearing about Deli Works when I asked people around about their fav places and where they wanted me to venture next. Located in Holly Ridge, inside a former nursing home-turned charming office building, is where you’ll find it. It’s also within walking distance to Holly Ridge Municipal park, so you can have a nice breakfast and take the kiddos over there to run it off and play! When you walk into the entrance there are plenty signs directing you to the tasty gem, and upon entering you are met with friendliness and a smile. I took my family along for the ride and we ordered an sweet and savory goodness off the menu!

As soon as I saw this as a menu item, I knew I had to order it along with our food. French toast is an all-time fav of my hubby, but most of the time I pass over it because I’ve always felt it’s overrated. Let’s be honest: somtimes french toast on a menu is little more than an underwhelming piece of egg-y bread topped with syrup. Not here! When I saw it was a casserole, I knew they had put a flavorful spin on it and I wasn’t wrong. They take their ciabata bread, chop and mix it with cream custard. It’s baked until crispy with a homemade cream cheese glaze, and topped with blueberries, strawberries, and a side of maple syrup. Go ahead and swoon because it tasted as good as it sounds! Crisp on the outiside. Sweet and creamy on the inside. The fruit was the perfect fresh and sweet balance. Elliott and I devoured it without talking.

This flavor-filled breakfast bowl was the choice for us adults. Seasoned, fried potatoes are served under your egg of choice (I’m a medium-fried egg girl myself), with bacon or sausage (sausage for me, please!). They top it with pepper jack cheese and the most amazing salsa I have EVER had. Let me repeat that. I am a Texas girl and we all know that salsa isn’t created equal. They puree a creamy, southwest salsa and top the bowl with it. I had it before so I was smart enough to ask for some on the side, and wow! The creaminess of it creates a milder bite than the acidic salsa you are used to, but it still has a kick! I lifted my leftover side of it like a shot-glass and left nothing behind! I know, very lady-like, right?

The younger kids opted for this. It’s an oldie-but-goody. The white bread was perfectly toasted, with perfectly scrambled, fluffy eggs, and melted cheese. Salty bacon was the star of the show. It was simple. It was delicious. I had a bite of course, and they left nothing behind!

Well, Isaiah didnt want breakfast! My confident, athletic, 10-year old who is a consumate foodie already, expressed that he would be picking out a non-breakfast item. Okay, son. Fine. He opted for a chicken sandwhich because he loves them. The chargrilled chicken sandwhich was everything he needed it to be: marinated chicken, carmelized onions, sauteed mushrooms, which he omitted (HOW?), and honey mustard sauce. Can you ever go wrong with you combine these ingredients? Well, DW isn’t here to find out. The chicken was tender and juicy, while the bread was once again perfectly toasted.

After our first couple of bites, they were already exclaiming they wanted to come back to Deli Works! My seven-year old daughter let me know she wanted to return the next day and my husband, who is of little words, had a lot of positve comments. We also loved the fact that there is outside seating, which we took advantage of. Inside seating, call-in, and takeout is also offered. Their place is charming and family-friendly. I urge you to try the above dishes and be merry.

Deli Works is owned by Joshua and Sara Parrish, according to their Facebook page, and has been open since December of 2018.

FORKS UP! FOOD DOWN,

Don’t miss the other Food articles by Leah Norman!