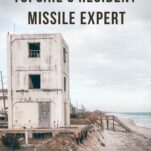 We are all on the lookout for patterns. When we encounter a number of personal significance or meet someone from our hometown while abroad it feels lucky, like the universe is giving us a wink.

Now imagine if, after a lifetime in a prestigious career, it’s time to retire. A lovely seaside community, quiet but not too remote, is the perfect place. Come to find out, your new address is down the road from the birthplace of what would one day grow into your niche industry. Such a profound coincidence must feel like the universe applauding.

Jimmy Carter had such an experience when he moved to Topsail. Of his fateful reunion, he says, “It felt amazing, like I was closing a life cycle.”

Before interviewing Jimmy Carter for this article, the idea of wrapping my head around missile defense and Aegis combat systems was daunting. That fear fell away when the real story revealed itself as not being too concerned with technicalities. Instead, the profound ripple effect a 1940’s Naval operation on Topsail Island would have on today’s most ubiquitous technologies stood out. The image processing in cameras and Photoshop, even the prevalence of personal computers, can be traced back to Topsail Island. As could Jimmy’s career.

Since 1975, when Jimmy left USMC active duty, he has been a weapon systems engineer specializing in ballistic missile defense (BMD). Although semi-retired now, he still makes regular trips to Huntsville, Alabama to access classified information that, in his new role of consultant, he remains privy to.

Shortly after he “retired” in 2011, Jimmy was approached about teaching at the University of Alabama, Huntsville (UAH) a course on Aegis Combat Systems Engineering, his specialty since 1995. While writing that course he made the connection between Operation Bumblebee and his Topsail address.

“I always thought the Bumblebee Program started at China Lake in California,” Jimmy says, “but it was completely done here.”

Bumblebee began in response to the kamikaze fighter planes (early manned cruise missiles) in WWII that terrorized sailors at the battles at Okinawa and Leyte Gulf. The Navy began to explore ways to destroy incoming air planes and missiles. Shortly thereafter the Navy outgrew the 26 miles of towers they’d set up on Topsail Island, then an unoccupied stretch of sand and marsh. Operations were relocated to the vast stretch in the Mojave Desert known as China Lake.

Since its desperate beginnings at the end of WWII, Air & Missile Defense and the capabilities of affiliated technologies expanded tenfold. At the beginning of his career, Jimmy and his colleagues calculated how much energy it would take to run a computer algorithm for a game of chess. It would have caused a global blackout.

With the surplus of energy postulated by Moore’s Law in 1965, the unexpected commercial demand for personal computers, and influx of funding through President Reagan’s Strategic Defense Initiative, Jimmy had the advantageous and whirlwind experience of working through one prolific breakthrough to the next. As his career at GE then Martin Marietta then Lockheed Martin spanned the merger mania of the 1980’s and 90’s, he was on the frontline of developing and utilizing those technology advancements.

“It’s all about trying to hit a bullet with another bullet. What kills the target is kinetic energy, the mass and velocity of the bullets coming together.”

When Jimmy began working with Aegis in the mid-90’s, his work as a problem solver was especially satisfying.

“Applying ‘State of the Art’ Technology in designing and developing a BMD weapon system while correctly applying the laws of physics leads to a successful conclusion,” he says. “Concerned scientists told everyone it was impossible to make a direct “hit-to-kill”  on a ballistic missile with a land based weapon system. From a ship that’s doing 25 knots in high sea states seemed even more impossible. So, from an engineering standpoint, proving them wrong was a joy.”

With his extensive Aegis experience, Jimmy was brought onto Operation Burnt Frost in January 2008 (see the press release here), an operation that still today remains mostly classified. What we do know is that in 2008 Satellite USA-193, out-of-order from the start and having never discarded its toxic fuel, was adrift in orbit. Projections determined it would crash-land somewhere in the United States, potentially causing grave damage. President George W. Bush ordered the Aegis Ballistic Missile Defense System to be modified to do what it had never done before from a ship: shoot a satellite out of orbit in space.

There is much about Burnt Frost Jimmy can’t tell us but it was a notable moment in his career.

“I can’t talk about the details but we did it. And we did it in 6 weeks. It was a long 6 weeks for certain industry and government people involved,” Jimmy says. “Aegis was not designed to do that. What it had to do was so far out of our design. In everything we do we factor in the probability of success. Nothing is certain in our world.”

Despite that lack of certainty, they were able to destroy the threat with one shot.

I asked Jimmy about his involvement with the Missiles & More Museum on the south end of Topsail island. The building was where the first defense missiles were put together during the war effort and today offers visitors insight into those then fledgling programs. He’s spoken with the director about giving a talk, plans are still up in the air.

For his vast understanding of physics, calculations and calibrations, however, the chances and coincidences in store for Jimmy in Topsail were beyond logic. During his first visit to the museum Jimmy’s expertise came up and he was asked to decipher a ship’s Missile launch from the CG70 in a large photograph on the wall that no one had a proper explanation for. Not only was it the Aegis BMD project that Jimmy was the program director for, he was wearing a USS Lake Erie hat when asked the question. The USS Lake Erie (CG70) was the  Aegis warship from which most of the BMD test shots  as well as the famous Satellite shot in 2008 were fired from. The photograph caught Jimmy’s eye because he saw 70 on the side of the ship.

So what, in his expert opinion, is next for missile defense? Jimmy is understandably tight lipped about the classified stuff, but what can he tell us?

“The future will eventually go back to directed energy weapons. And when we have the technology that supports the power density needed we’ll use it more in missile defense.” But it might be awhile, because, for right now, he tells us “there’s not enough commercial application for things like high-powered lasers where commercial industry is incentivized to develop products like they did with PCs and cell phones.”