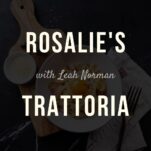 Hello Ferry Food Family! My newest series “Wilmington Wolf Down” will explore food gems that I find in, you guessed it…WILMINGTON, NORTH CAROLINA!

Since, I transplanted here last year, I’ve come to know that a trip there really isn’t a hassle at all and I have become quite familiar with the area. Well, that might be an exaggeration, but I found a hair stylist there, who is located near Market Street, and she is who actually told me about our first gem: Rosalie’s Trattoria. You know how salon talk goes…one minute you’re talking about the latest celeb gossip and the next minute you’re being told there’s an authentic Italian eatery that has UNBELIEVABLE food. Of course I had to check it out because I’ve gotta admit: I hadn’t had a mind-blowing pasta experience since my move here.

Well, I visited Rosalie’s Trattoria last month for takeout, one gloomy weekday, and I was immediately greeted with their warm, friendly atmosphere. There’s a long hallway when you walk in, that opens up into the dining room, where its dimly lit, and quite romantic. You could tell that the staff has known each other for a long time and may possibly be family. I told them I was there to order take-out and was handed a menu, where I began to look for signs this place was legit.

What are these “signs” I’m referring to? Seeing spaghetti carbonara, which is one of all-time fav pasta dishes, or linguini and clams. Yeah, they have both. I ordered the carbonara and braced myself for the experience. You don’t understand. Unless you go to to a mom and pop italian eatery, you aren’t going to see this as a menu item. And carbonara is quite simple. It’s spaghetti sautéed with pancetta (Italian bacon), onions, white wine, a touch of cream, and parmesan. Most versions also incorporate an egg that’s strategically cooked in. I then ordered my hubby fettuccine alfredo with chicken because that is his favorite, along with millions of other people, right? I asked them if their meals came with bread and they told us that a fresh, homemade batch had just came out of the oven. They eagerly pointed at it to us and he and I looked at each other and SMILED. We sat down and anxiously waited, while they offered us water and were very accommodating.

As you know, we live in Sneads Ferry, so we didn’t get to partake of our food immediately; but what we did get to indulge in were the complimentary cannoli they gave us when we left. Yes. Upon handing us our food, they told us that they were giving us their cannoli as well and I repeatedly thanked them for their kindness. When we got into the car, it was barely running before we opened the container and saw the delicate dessert, bursting with sweet ricotta. But, here’s the thing: I have never been crazy about cannoli.

However, I am always open to trying the same thing from a new person or place. We each picked up one one of them and took a bite, A unanimous “mmmm,” sound filled our mini-van as we inhaled the treat and decided the children wouldn’t be partaking in this. I mean, after all, it was too messy for the car right? Well, it’s safe to say my mind was changed that day! Rosalie’s makes a luscious, creamy, crunchy cannoli, drizzled in chocolate that ANY ONE would love. WOW! I knew that dinner would be even better. Who says dessert can’t come first?

Upon arriving home, pasta was the priority! While we worried that our food wouldn’t be fresh enough and had probably settled, we remained optimistic. I warmed up our meals and we sampled on the homemade bread. It was time for another unanimous “mmm,” paired with an exclamation from the hubby about how soft it is. As soon as I bit into the carbonara, I was met with al dente pasta and savory pancetta folded into the perfectly flavored cream sauce. I loved it. They know what they are doing and have been making pasta for a long time was what it told me. There was plenty of bacon and his had a hearty piece of perfectly grilled chicken breast that paired well with the homemade alfredo sauce. And that is the only way alfredo sauce can be: homemade. Not jarred. Not frozen. When you take the time to make the simple sauce, it is very rewarding and undeniable. Both sauces were very rich and the portions were enough to share.

I want to go over some other items on the menu that caught my eye. These are items I will order when I return and ones I suggest you try as well!

The Faces behind the Food:

Rosalie’s Trattoria is owned by Al and Rosalie Cervini, and I had the pleasure of connecting with him. He shared their motto is “it’s the people that make the place.” Remember when I said that it felt like everyone there was family? Alfred says their belief is that “we’re all family, both employees and customers,” and I felt that from the moment I entered. It’s easy to have a motto or beliefs, but if those sentiments aren’t shown, they are just words. The Cervini’s opened a year and a half ago, simply because they wanted to and it has been rewarding and fulfilling. He continued, “its the small things that are the most gratifying. We do the right things for the right reasons and the rest falls into place.” Wow. Such a simple standard to live by and to follow. I was very inspired by his message and I know you will be too.

How to Find Rosalie’s Trattoria: